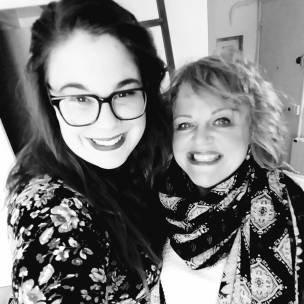 A couple of fearless women, one with crazy hair (news flash: it me).

I knew I would mess up and skip a day of blogging. What can I say? I’m tired. We intended on waking up early to head over to the Louvre before our lunch reservation. Let’s just say that us waking up at ten and getting lost in the metro for 20 minutes didn’t help in getting any of that accomplished. What’s that saying about the best laid plans of mice and men? Don’t bother getting attached to plans, because they’re for sure gonna change.

Having finally learned that hard lesson of flexibility, we changed course and had our lunch in an honest-to-God brasserie. Yes, ladies and gents, I finally bought a meal in a French-speaking cafe. I mean, we stumbled and the guy obviously knew we were Americans, but he was patient and let us work through it. I mean, we did it all. It was a veritable French verbal circus. “Je voudrais” this and “Comment dit-on” that.  Man, oh man, was I proud!

A coffee given freely and compassionately always tastes the sweetest.

When it was time for the check, we were surprised to find that some kind soul had gotten us a cup of coffee each for our honest attempt to speak the language as “encouragement.” It was probably one of the nicest things that anyone has ever done for me before. It was small and perfect. It made me courageous.

I basically skipped to the Musée d’Orsay with poor Lisa in tow, which was way less crowded than the day before. I didn’t know this, but the museum was built as a train station for the 1900 World’s Fair. We bought these pretty sweet museum passes that’ll be good for the entirety of our stay. Passes that allow me to see pieces by Renoir and Cezanne, talented cats like that. It’s insane to think that there’s this inexplicable link connecting me, a circa 2017 nobody, with an incredible talent from hundreds of years ago. Amazing.

It’s the Musée d’Orsay, yo.

But no matter how amazing or nice things are, I’m an 85-year-old woman on the inside and need frequent naps. So, we returned and slept until it was time to eat again (because, y’know, eating and sleeping is what vacation is all about). Last night we went to this place called Le Procope, allegedly the oldest restaurant in Paris, and were suitably charmed by our server who managed to sell us some really delicious Champagne (from Champagne). I went all out: calf head for dinner, bread, bubbles, and tiramisu. While it was frustrating to be spoken to in English, I appreciated the friendly atmosphere and the food was out of this world. What do I have to complain about, really? I’m in fucking Paris.

Things I’ve learned so far: shift your perspective, gain some more patience, appreciate all that you have. If you do that, Bailey, you just might be okay and grow into a real person.