Funny how one day can begin with screaming on the bottom floor of a Parisian metro because you’re lost and end by giving cheek kisses to an Italian man who drew your portrait in the courtyard of the Notre Dame. While I prefer life to be comprised solely of moments like the latter, the former make the day so much sweeter in the end.

It’s as though Versailles doesn’t want us. Even when we start get out of the house at a reasonable time, we can’t get to where we need to be. For some reason, Google Maps took me on the wildest of goose chases and sent both me and Lisa down into the bowels of hell to take a high-speed train to our destination. Only we weren’t on the right train. We were on the train that would take us to a place where the palace would still be 30 minutes away by foot. I hate being lost. And with no signal 100 miles below the surface of the earth, I’m dragging Lisa around the metro hallways like a person on the brink of insanity. 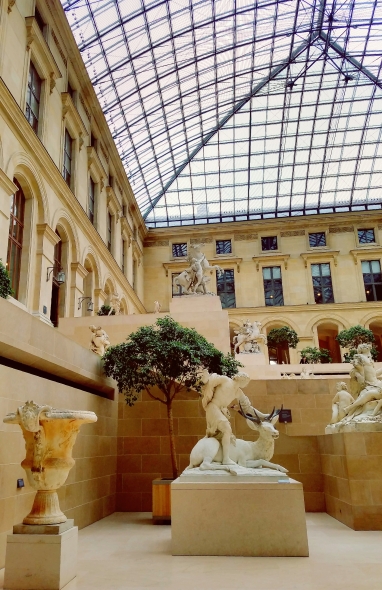 Look at it. The beauty, the art, the fact that I’m here.

In the end we decide to go to the Louvre instead. I say that as if the Louvre is some sort of consolation prize. It isn’t. It’s a blue ribbon at the state fair. After finally hissy-fittin’ my way to the pyramid, we went down an escalator and into the sort of world you only see in movies. Despite the early hour, the place was already packed with more people than I have ever met in my life. I’m talking thousands upon thousands of human beings from every walk of life, every country, every age. If I hadn’t felt so claustrophobic, it would have been incredible.

Instead of heading off to the Mona Lisa like everyone else, Lisa and I drew up our battle plan because there was just no way we could cover the whole museum in a day. French and Italian paintings and sculptures. No fuss, no muss, no coconuts. The Louvre is massive and I couldn’t help but notice that it’s more than a little hard to imagine people once living there. Each piece that is on display is perfect and beautiful and makes me feel so insignificant. I mean, I’m not jealous or anything, just awestruck and grateful for the moment to be there. 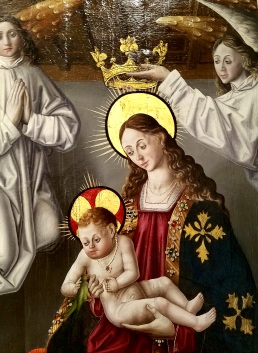 Yep, look at that creepy little baby face. There were 100s of them.

We wandered through the French halls with the appropriate oohing and aahing, though I was consistently terrified by the baby Jesuses and their tiny, Danny DeVito faces (not a sacrilegious statement as artists once depicted Jesus as a grown adult in a baby’s body because of his holiness. Boom, art fact). Being from the deep South and having some familiarity with religious iconography, I was absolutely floored by the amount of paintings and sculptures and pieces of jewelry there were depicting Mary with the infant Jesus and the Crucifixion. Like, wow.

Bumping (read as: throwing) arms and elbows, we make our way through the galleries and finally to the Mona Lisa. Well, we tried. The whole of the room was stuffed to the gills with people trying to grab a selfie (I’m not going to judge). One guy had a selfie stick out (again, not going to judge as we have one, too) and when one of the room attendant’s told him to stow it, he got sassy and was escorted from the room. It was all too much for me and Lisa, so we decided to grab a postcard of that famous smile and selfie with that later. 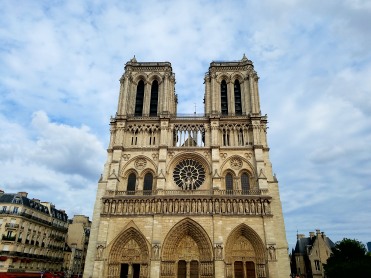 The ever lovely Notre Dame

Once we were all-Louvred out, it was nap time (like I said, old lady here). I’m proud of us for getting back up and walking to a bookstore for coffee. Only we didn’t get there either. When we were looking at the Notre Dame I was interrupted by one of those street artists who wanted to sketch my picture. He was a charming Italian. We flirted and laughed while his helper and another artist threw in their comments, drawing big laughs from the other people who work that area. People watched. An elderly woman took my photo as I sat  getting a sunburn at 8 in the evening. While there were some funny moments in which I got to stretch out my French, the end of this story is me getting a proper Italian goodbye (a kiss on each cheek) and scoring a number. I decided not to call him. Instead, I had dinner, bought a great new book, went home, and worked. Because I’m allowed to do that. I am smart, beautiful, and driven. I’m in Paris. I can do whatever I want and be proud of who I am.