I start off with my head near a toilet and wishing that I would learn not to take vitamins, no matter how badly I need them. I’ll be equally real about this: Today was not a great day. It was not a, “I am woman, hear me roar,” sort of day either. It was the sort of day where you reflect on your life and wonder how the hell it got to this state. And then you drink a bottle of wine, which is totally appropriate.

I would again like to say how grateful I am for my travelling companion. Lisa lets me stew and sit and take the day at my own pace. She lets me be quiet and  sad. Eventually, of course, it came to a point where we had to leave and see the city, because why sit around in your Airbnb feeling bad about yourself when you can do the same thing outside? At least then you’ll get some fresh air. 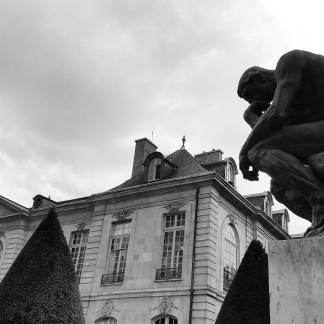 We headed to the Rodin museum first thing , because if someone ever needed to see The Thinker, it’s me. Honestly, I was a bit underwhelmed with the overall experience, especially in comparison to some of the more lavish places I’ve seen these last few days (looking at you, Versailles). Maybe I just don’t get the appeal of Rodin. Maybe I was just too pissed off to be happy.

Yeah, there it is. That’s the answer. I’m trying to be more honest with myself and everyone else. At least it was sunny.

After that little visit, for some reason, my irritability levels were sky high. There were too many people, too many crying babies, too many cars, too much wind. Nails on a chalk board, friend-o. All I could think about was the failure of my relationship and the uncertainty of my future. Who am I? Who do I want to be? When it was time to move onto the next place, it seemed almost natural that we headed for the Palais-Royal.

You probably don’t know this, but I’ve been obsessed with the French Revolution since I was twelve. Eventually, I started to reinvent the history of France, a sort of what-if scenario. At the forefront of the story is an imaginary grandchild of the grand-duke and how she helps incite the Revolution, all from the safety of the Palais-Royal.

The instant we walked into the courtyard, I started to cry. Not so much because it was as though everything I had written was there for me to see, but more to do with the fact that I had at last arrived to this realization that I’m a writer. I write about faraway places that both exist and don’t exist. I write dichotomies. Something about that was magical to me. For several weeks, I’ve felt like I keep writing a story that no one is ever going to read. It’s hard to work through something like that, especially when your only desire your whole life was to be a writer. A few days ago, I went so far as to tell Lisa that I wasn’t sure I even wanted to be a writer. Standing somewhere my characters have been, I’m not so sure that’s true.

We wandered for the better part of an hour before trotting off for some ice cream, but I’ll never forget the sun playing off those hundreds and hundreds of windows. Everything else fell away except for me and the Palais-Royal, even the tourists and locals. Despite the noise, it was quiet.

For the rest of my life, I will carry that courtyard.