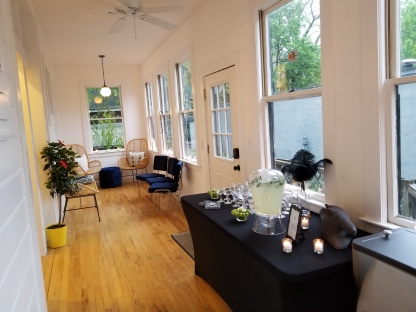 In the bleak midwinter, we sat around the kitchen table and talked about Claudia’s upcoming birthday. Michael and I strove to outdo one another in sheer absurdity (“Let’s have a reading in the library” or “Do you think we could cover the pond with a plastic sheeting so people can dance on it?”). I can’t remember if there was snow on the ground when we were having this conversation, but will imagine there was for the appropriate amount of dramatism. Weeks ago we started to carve out these plans and then, almost suddenly, it was time to actually do the thing. And we did. We went full-Gatsby.

I’m not really sure why we landed on a ’20s theme. It made sense at the time because the House seemed ready for a party, but only if it was extra-extra, especially since it was both our first party as a house but also Claudia’s birthday (and she deserves the moon). What better representative of American excess than the Roaring ’20s? As the weeks came, I assembled my task and menu, having put myself in charge of food, and then pleasantly ignored the reality of our upcoming party for six weeks.

Of course, Claudia didn’t ignore anything and preceded to acquire dozen of antique champagne glasses at rock bottom prices, decorations, tables, and all the other odds and ends that idea people such as myself often forget. The party drew closer and a beautiful invitation was sent (thank you, Elzerie & Michael). We received the RSVPs and then it was time to go grocery shopping.

In retrospect, my food ambitions were a little too…ambitious. I’ll briefly bore you with the menu because I’m proud: basil, prosciutto & blue cheese apple wedges, apricot goat cheese canapes, caprese salad bites, lemony mushroom crostini with shallot & chive boursin, smoked salmon potato bites, pear & goat cheese, bacon-wrapped dates, cranberry-feta pinwheels, deviled eggs, mac & cheese, and two legs of lamb. With the exception of some really dope mac & cheese made by Brennan, some much appreciated egg peeling, and a beautiful birthday cake from one of the best bakeries in Massachusetts, I set to the Herculean task of making 100s of hors d’oeuvres, everything timed down to the minute. With great dedication and determination to finish at exactly 7PM on Saturday, my fingers somehow managed to keep it together long enough to make it to the finish line. Well, ten minutes late because I started at 9:10 that morning, a mistake on my part due to some oversleeping. Luckily, no one arrives to a party on time. None the wiser, y’know?

Elzerie & Claudia doing the most.

While I worked, my roommates transformed the House into a glittering jewel ready for a clawfoot tub full of champagne, people dressed in flapper dresses, and electro-swing. Outside had been wrapped in strings of soft light, the beacon in Fort Hill. The halls were cleared for dancing and mingling. The kitchen and dining room were filled with food. The powder room had been filled with boas and champagne. The only thing we were missing was an eccentric billionaire pining for his lost love. Though, with strangers in the house, who’s to say there wasn’t? I’ll admit some light disappointment in the fact that no one wound up dead in our pond, shot by a jilted lover. How are we going to contemplate the dangers of the Jazz Age otherwise? Maybe next time.

It was at about this point that we were joined by our newest roommate, Liz, who is starting her medical residency here in Boston for the next few years. I’ll hand it to her, she fit right on into our insanity with a smile and a certain affability that I can’t but like already. I’d like to tell her that we don’t do stuff like this often, but that doesn’t feel quite honest enough. Hang around long enough and we’re liable to go full-Gatsby again. 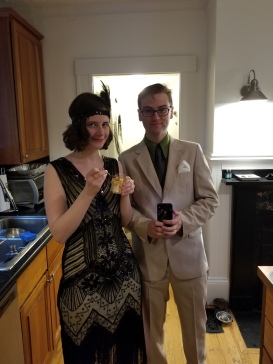 Gussied up, I joined my roommates (all of whom were looking good) and we began wowing our guests with drinks, snacks, and our charming personalities. There are few things that make me happier than a house full of people, and Gatsby night was just the thing to make my soul sing. Flitting about in a pair of high heels (I eventually kicked them off because I live here damn it), I met dozens of people while they waited to have Mitch take their photos in the library with his fancy camera. I’ll go ahead and tell you this now: the second half of the evening got itself smudged by an excess of champagne cocktails. There was, however, a champagne toast in honor of Claudia’s birthday, the real reason we came together for a party. She is one of the best people I’ve ever had the honor of meeting, and it’s obvious that she is well-loved by her friends. Happy birthday, Claudia!

“And I like large parties. They’re so intimate. At small parties there isn’t any privacy.” – The Great Gatsby

Somewhere at half-past 2 when the last of our guests finally saw their way out of our house, I was shooed to bed by my roommates. In the morning (or early afternoon, whatever), with head and feet throbbing, we met again around the kitchen island to feast on leftovers. We were quiet, careful to not cause any unnecessary unpleasantness. By all accounts, the party was a success. I should like to hope that there will be a sustained interest in the Bond House as the months come and go. I’ll go out on a limb here and say: We like large parties. I can only hope that the next party is twice as large. Twice the fun, right?