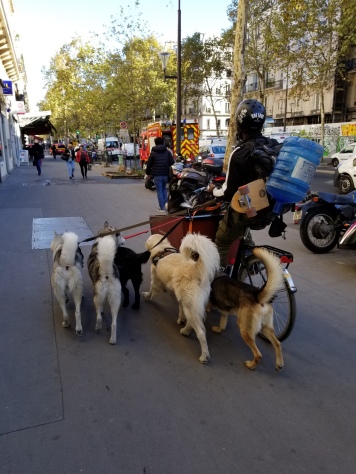 Not going to lie, this seems like a viable career option.

I start the day later than expected, but this is understandable when one considers the night full of fun and pho (another shout out to Victoria and her patience with me and my glorious introduction to picone beer). My hair is at peak fluffiness, I’m feeling strangely energized, I’m optimistic about what the day will bring. Then again, I feel this way a lot and sometimes wind up being nearly arrested, or lost on a train, or drop my food on the floor, or I’m accused of being a “snitch” by some rando on the street (I’m still highly offended by this bold claim. Mama didn’t raise no snitch). Perhaps today really will be a good day. Or better yet: Today will be as good as I make it. Optimism is the secret to all good things in this life. Where better to be optimistic than in the City of Lights?

Traveling around on my own makes me feel alive and a part of this city. The weather today is again phenomenal (autumn is the best time to travel, never you mind the fact that none of the fountains are on). I wander through the streets eating a ham and cheese sandwich like a freak. I sit down on a bench to be less conspicuous. Mostly I don’t want anyone to see me cramming a coffee eclair into my mouth, which is so good that it feels a little sinful. It’s not my fault they’re so delicious. Now if I could just find a glass of water…

Alas, there’s no fountain water to be had, so I walk into the Pompidou and pretend like I’m thirsty for art instead. Unfortunately, I rarely understand modern art. Forgive my ignorance, but some of this stuff looks like outright trash. Then again, some of these pieces get inside my head so fully that I have to sit down in the middle of a crowded gallery to write, so that’s something.

I’ve got tree trunk legs,
a pot belly stove stomach,
turkey giblet arms. I stopped
eating but nothing changed.
I’m double-chinned to Sunday
even though I deny the Eucharist,
the way I deny new lovers
from seeing me in the light.
These bones are strong, the body
a temple. Yours is fluted
with tendrils for others to bask
beneath; every breath a romance.
I’m fat, flat feet, like my hands
that I hate to see reflected
in the subway’s windows
when we go through the tunnel.
Your hands are like you: slender.
You look ready to faint, to be
caught in the arms of eagerness,
but that doesn’t make you weak.
I never fall, I’m balanced,
but that doesn’t make me strong.
I’m sorry I hated the way
your delicate ankles twisted
all topsy–I wanted them to break.
I’m glad they didn’t. Envy
is the cross I must bear; thank God
my shoulders were built for burden. 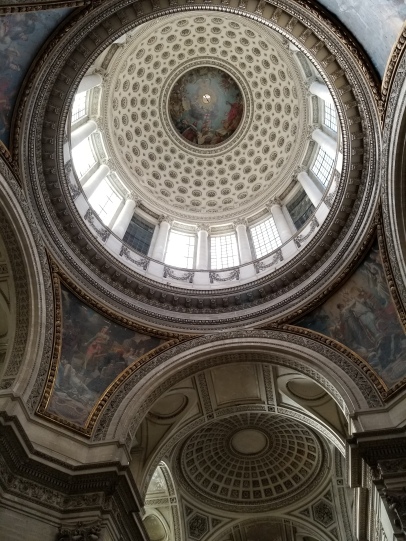 Not inside the Conciergerie, but still a dope photo. Enjoy.

I move from modern art to history across the Seine and into the Conciergerie, the last residence of Marie Antoinette before her execution. The building itself has a long and varied history, but it is in the Queen’s small, sad excuse for a bed chamber that fills me with dread. I think about how cruel and foolish human beings can be, oftentimes for no other reason than that they are on a murder roll fueled by pure paranoia. I mean, Robespierre himself (some would argue that he was the French Revolution’s Papa) was killed by the people he freed. These diametric figureheads died martyrs to a cause that we are still feeling the effects of today. When I walk through the courtyard that the female Conciergerie prisoners had for their laughable “rec” time, I say a prayer for both a queen and a revolutionary. What a world we would live in if things had gone just a little bit differently for one of them. Well, you know, a lot differently.

I tour Notre Dame and the Cluny Museum, but I won’t bore you here with the details about those uneventful visits (minus the wedding shoot I ruined, a woman nearly being hit by a car, a proposal, and an arrest), because all of that pales in comparison to today’s real triumph at the Luxembourg Museum. Without knowing, I wonder by and see advertisements for my favorite artist, the artist for whom my cat is named. That’s right, ladies and gents: Alphonse Mucha. 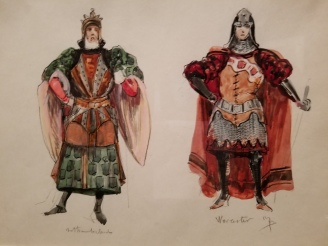 I had no idea he did this kind of work.

I nearly scream on the sidewalk over a man long dead. I wait in a line for 40 minutes just to tour this exhibit. I pay nearly $20 to enter. I willing mix into a horrendously rude crowd. I fan myself with my program so I don’t get too excited and pass out.

Now, I’m sure many of you think you don’t know who this artist is, but I promise that you do. Think about absinthe, then you’ll remember. It’s crazy to me that a person could ever produce this much work on their own; and not just that, but there is such a distinct way that Mucha develops and changes as an artist based on his view of the world. In my eyes, Mucha and Monet are on the same playing field. The wild abandon and bold color of youth that gives way to somber political reflections that somehow retain the fire of an earlier time in life? Magic. Without Mucha, there would be no art nouveau. 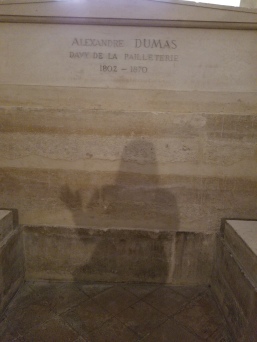 Nearly two hours later, I stumble away with a new notebook and a broken GPS. It is by sheer dint of will and some clever use of a map that I find my way to the Pantheon. Truth be told, I have no prior knowledge of what the Pantheon is. I now know that it is sort of like a civic graveyard for France’s heroes (i.e. Rousseau, Voltaire, Madame Curie). It’s a somber, beautiful place. What I really didn’t know is that Alexander Dumas is buried here. As I’m scanning the outside of crypts, I trip over my own feet when I see his name etched out in the hall. A few people mill about and record their journey (this sort of thing baffles me. Are you really going to watch your shitty iPhone movie later, Jerry?), so I wait for a moment alone. Alexander Dumas is the reason I started to write. The Count of Monte Cristo was so complex and cruel and just and insane that I fell in love with it in that deep way that only young people can. It was the sort of novel that told me that life is complicated and rarely clean, that sometimes things that are so horrible happen and can change who were are at a fundamental level. And now here I am, standing in front of greatness and feeling completely overwhelmed. I cry. Again. I walk towards home, baffled.

There are three selfies of me in Paris, this is one of them.

There’s this moment
on the metro
where a child eats
potato chips draped
over Grandfather’s arm
and I think about how
much his heart will break
when he goes.

Today was a beautiful day.